All Photos and Honours can be seen in 'The History Album' (beneath the Trophy Cabinet in The Pavilion) - The Album was donated by Lew Collier
Photos and Information kindly donated by: Maria Forbes - Local Historian ; Colin Westlake , John Blewitt, Mike Adams, Jonathon Feltham

We must thank our three founders (Messrs. Moore, Anthony and Weekes ) who were privileged to play on the lawn of Hampden in Sidcot Lane (the home of Mr Moore).
In 1921 they had that gem of an idea of establishing a bowling club in Winscombe.

The ground on Sandford Road was obtained and the club opened in May 1922.

The rest as they say 'is history'!

Click on these to enlarge and read a report of the
opening of the green : in The Weston Gazette 27th May 1922 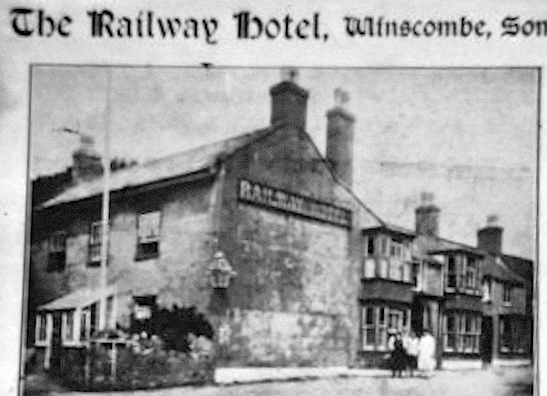 NOTES EXTRACTED FROM FIRST MINUTE BOOK
These are the first minutes recorded for Winscombe Bowling Club:

Minutes of Committee Meeting held at the Railway Hotel, Winscombe, May 5 th 1921
Present:- Messrs. J.A.Dunster, Amesbury, Moore, Weeks, Todd, Compton, Wake and Anthony
It was unanimously resolved that the Club be designated the Winscombe Bowling Club Limited.
Rules for regulating the Club were considered and finally adopted and the Secretary was ordered to have 75 copies printed.
It was decided to call a meeting for Thursday 18th inst. at 7.30pm.

This postcard from about 1924 is Winscombe Bowling Club opposite the Village schools in Sandford Road . You can see the pavilion is being constructed(top left)

This picture is of the first game played on the new green in 1949.
This was after it was relaid following an infestation of 'leatherjackets'. Mrs Bob Cooper sent down the first wood.
Her husband (in blazer) , was club captain. Mr R S Brewer was the president. 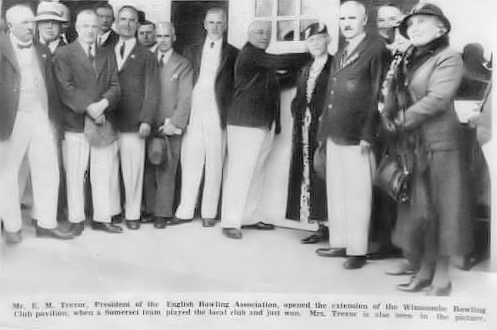 The opening of the new extension by Mr E.M Trevor President of the English Bowling Association 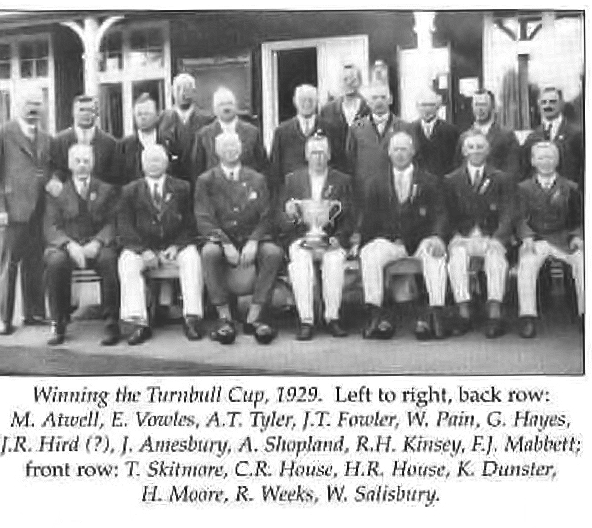 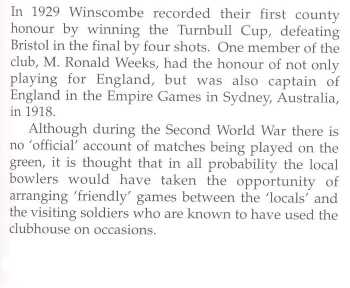 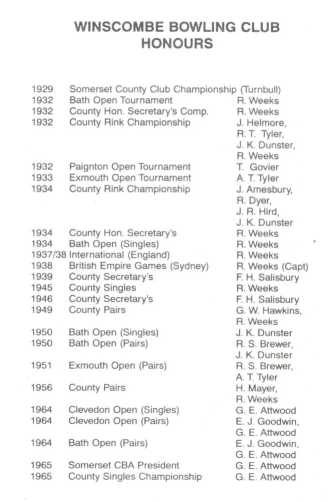 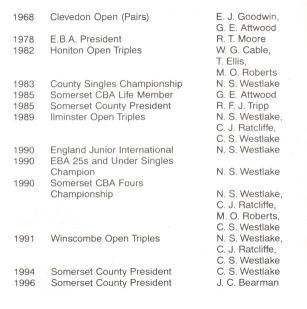 Five Winscombe members have held the position of County President

Only three other clubs in the county can match this achievement- Victoria,Bath, Clevedon, 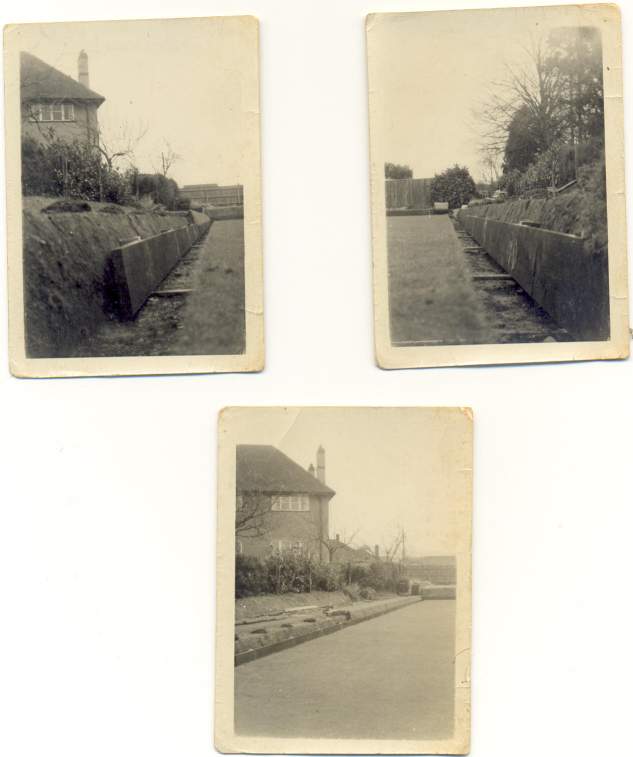 More Recent History in the Making

This meeting was attended by Club AND Ladies Secretaries
Mike Adams and Lorna Whatling.
A historic day ! The first time a lady from Winscombe BC has been able to vote at a Somerset County Meeting.

Club Members voted overwhelmingly in favour of a motion to integrate Ladies into Full Membership of the Club . With effect from the start of our New Season (1st April 2010) Ladies will, for the first time, have full voting rights and the right to hold office on the Management Committee. The Ladies captain Helen Watson and the Ladies Secretary Lorna Whatling will be the first Ladies appointed to the Committee.

A historic meeting as this was the first time in the clubs 90 year history that ladies had been able to vote at this meeting . It was also agreed that at long last Pushers/Gatherers would be purchased to help members gather their woods after each end.

The Ladies Captain Helen Watson and Ladies Secretary Lorna Whatling were welcomed onto the Management Committee by President John Baker who said that this was a Historic day for The Club. Lorna Whatling thanked him on behalf of the ladies and said they all looked forward to working with the men for the good of the club. John reminded the members that there was a Ladies Club in 1923 just 2 years after the club was formed but this did not continue.

As Captain Tony said after the match this was a team win but some need special mention......In the first leg a 22 shot win on Tommy Ellis's rink and a 10 shot win by Mike Adam's rink meant that once again we took a shot advantage back to Winscombe. This time however, it was not let slip and a fine win by Mike Adams rink by 16 shots ( despite dropping a 6 on the 20th end) and an 11 shot win by Mike Nash's rink (despite dropping a 5 on the19th end) saw Winscombe home by an aggregate 22 shots over the 2 legs.The Parrot Shield is back home where it belongs.

For History of the Parrot Shield Winners - Click Here

The new Short mat has been delivered and installed........

Before delivering the first wood Club President John Baker wished everyone who played on it the same enjoyment
as those who had played on the old one for the last 20 years. Another historic day for WBC

Celebrated by a match v Barbarians

Pushers/gatherers were used for the first time on this green in a National 2 rink mixed competition against Fosseway . Winscombe lost the match by 5 shots but each team won on 1 rink. The Winscombe team was Mike Adams,Mike Roberts,I Tofte and Mavis Adams; Mike Nash,Ken Whatling,Sheila Nash and Jan Kimmins.

A Special General Meeting voted unanimously with 3 abstentions to reorganise the Club to recognise the Club's Mixed status.
From 24th November 2011, following the AGM, the club will consist of 4 sections:Men,Ladies,Estate and Social .
These sections will report to a Management Committee.

- A New Terrace for the club under the new Veranda 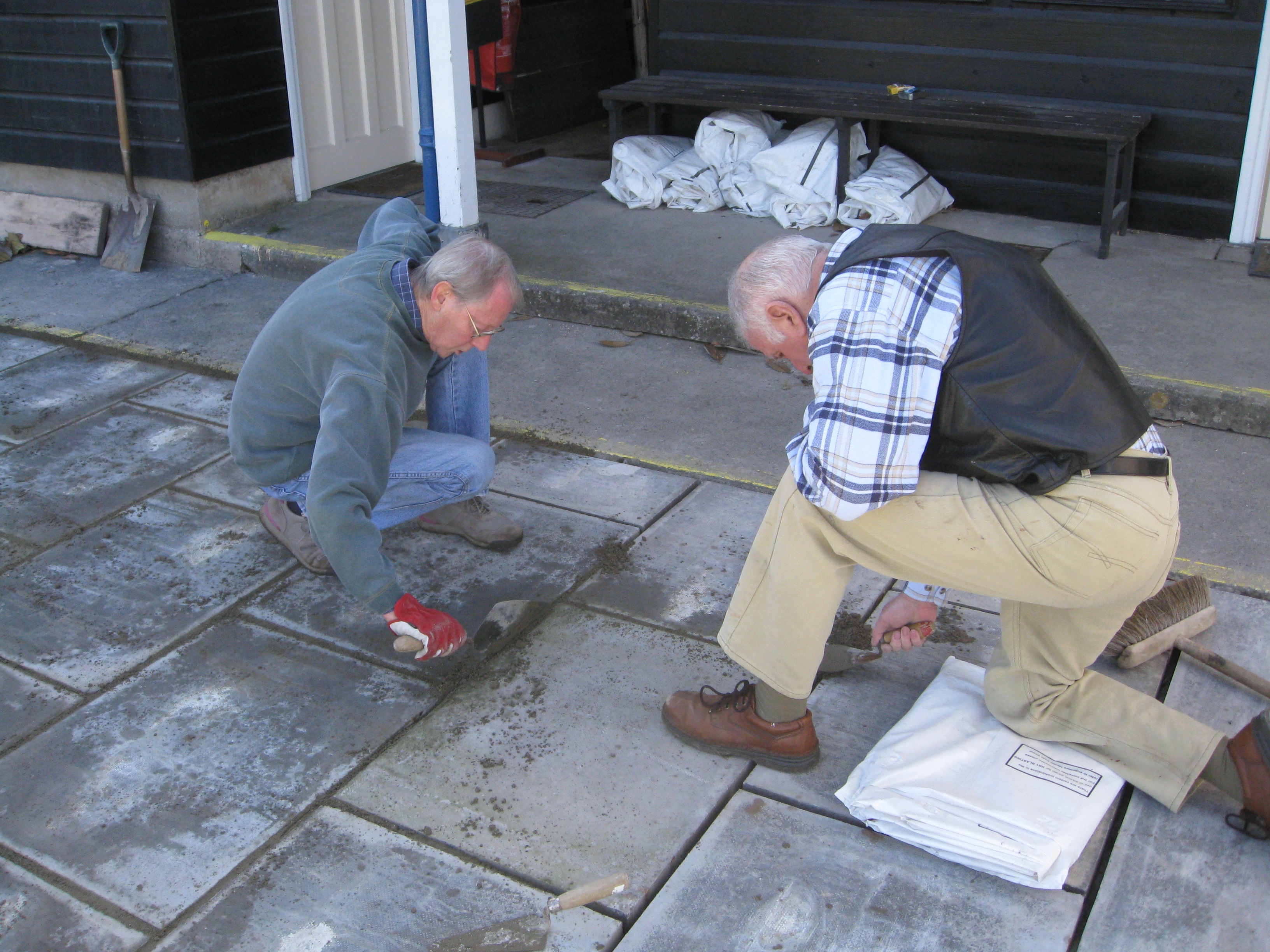 Tony Dudley and Andrew Watson get grouting!!( Sadly both have passed away -2021) 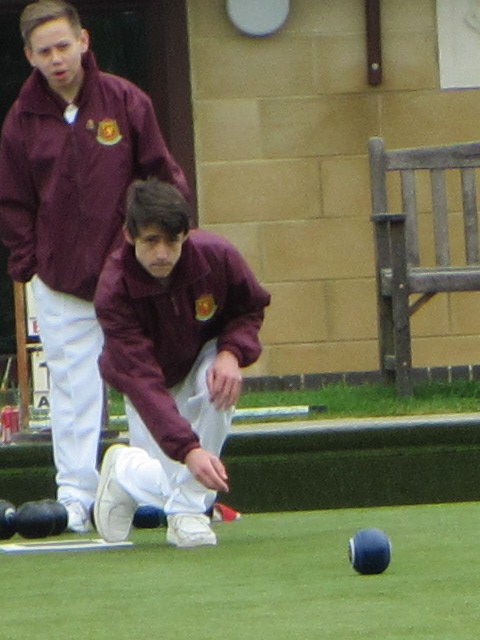 We win Weston and District Over 60's League

- We finish 3rd in the the Weston and District Over 60's League and win KO Cup v Portishead RBL at Mark Moor . WINSCOMBE " DO THE LEAGUE AND CUP DOUBLE"

Winners of Weston & District Over 60's Cup and League Champions 2017

Weston and District Over 60's League Knock Out Cup Final 2018- We win again!
Winscombe won the KO Cup for a third successive year. They 'did the double' last year winning both the league and the Cup.
This year they have had to settle for second place in the league which they secured on the same day as The Cup Final . Clarence failed by just one point to overhaul them in their last match of the season.
The Cup Final match between Isle of Wedmore and Winscombe ended up with a victory for Winscombe by 101 - 75 in somewhat cloudy and at times damp conditions. 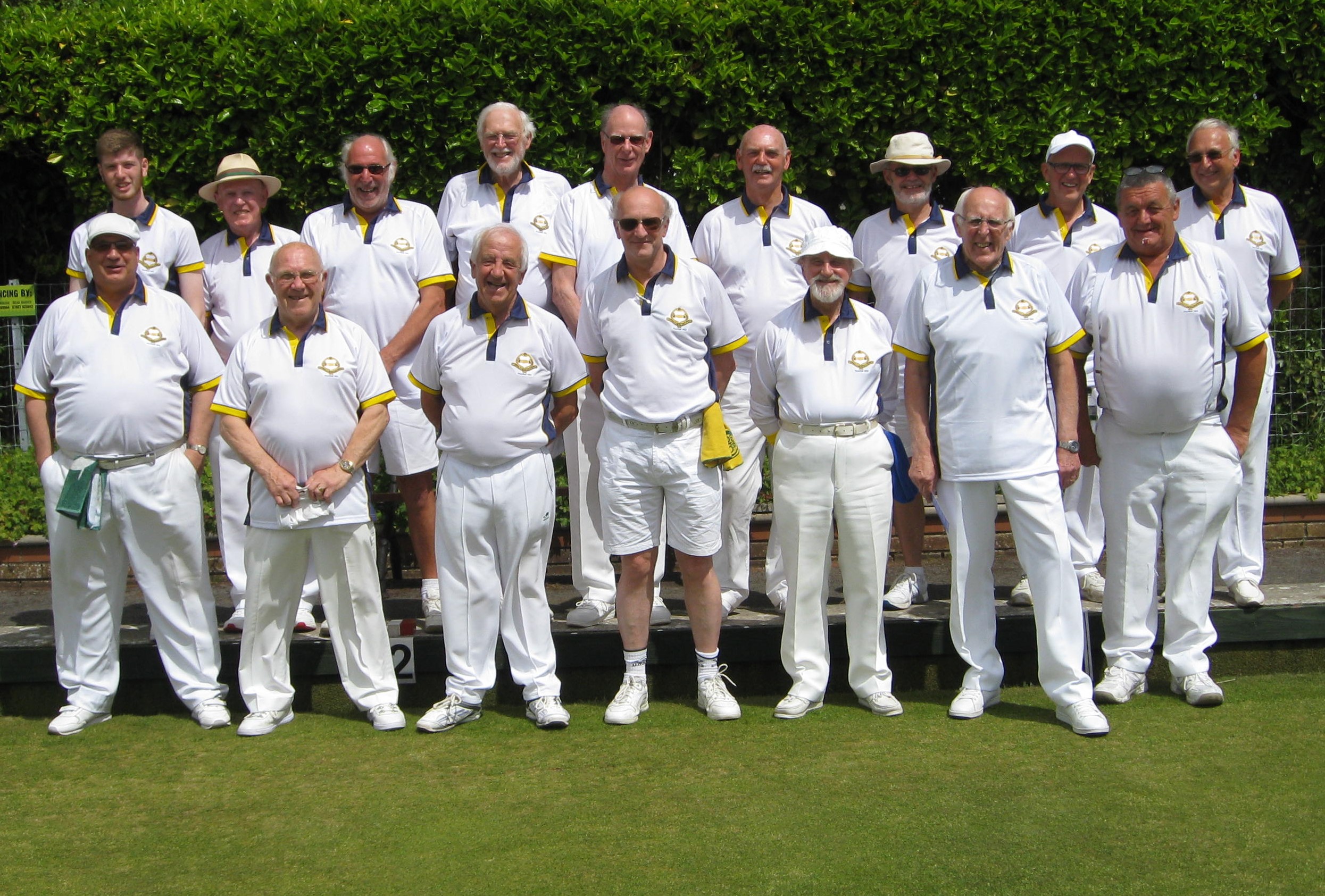 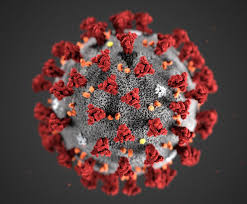 During 2020 this horrible virus swept the world and thousands of people were infected and dying.
The government introduced measures to protect the public and The NHS.
Eventually the Bowling Clubs were allowed to open but only for members and under very strict playing rules.
It's was a difficult year - An under statement!!
But Thanks to Careful Management by our Committee we were able to enjoy playing our great game .
Our 'pop up' bar (Thanks Wilf Ainsworth) and
Fish n Chip suppers (Thanks Peta Burns) have brought some normality back to Friday Evenings !
We managed to set up some Competitions for members too!
Congratulations to The Winners of the various Competitions and also to you all who took part.

Our Centenary Year 2021 and the virus is still with us!
A full Fixture List is being prepared with a number of 'Special Matches'
including Bowls England, County Presidents and The Barbarians!
The Bowling Club Opened to members only on 17th April again under strict rules!
MIKE ADAMS - OUR CENTENARY YEAR PRESIDENT
Opened the green with the first bowl of the season & raised 'Our Centenary Flag' 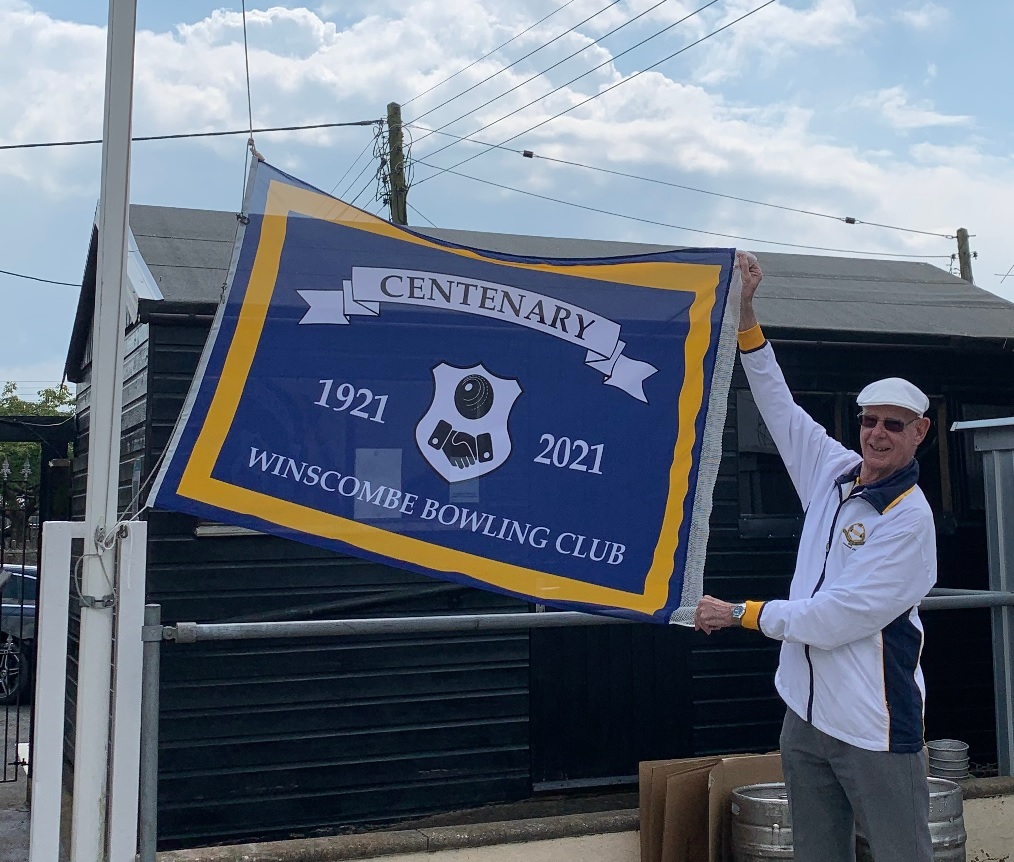 The government had set a 4 step pathway back to normality and a rapid vaccination programme
These were the rules:-
. "Following guidance issued by Bowls England https://www.bowlsengland.com/coronavirus-guidance/
Strict Covid Rules are in place. All matches will be played within the guidelines that restrict the total number of players of organised games to 24 with no spectators.
RULES FOR PLAY FROM 17th APRIL CAN BE SEEN HERE
Travel - There is currently no car sharing allowed!
Committee have decided to cancel all Friendly Matches until the 17th May.
Please check Fixtures online for up todate match dates

Ladies: NSTL League has been cancelled with matches being played as friendlies if required.
Ladies Southey Cup - New Arrangements HERE
We have also arranged a Men's Internal Triples League in a round robin format on 5 separate days until 17th May.
DETAILS & RESULTS HERE

For Roll Ups: YOU MUST book a rink with either Geoff Coombe or Ken Whatling.
RINK SLOTS AVAILABILITY FORM IS HERE

From the 17th May we hope that normal Fixtures will be possible!